Our 30th anniversary year goes out with a bang with our 120th issue! It’s packed with reports from Summer 2017 including the Shire of the Year final and the British Ridden Heavy Horse championship from the Horse of the Year Show; the Foal Shows from the Autumn, the Suffolk Spectacular, Leicester Show with its reintroduced heavy horse classes; the top ploughing matches, including the British National and the SCHHA Great All England; Countryfile Live and the Shire Horse Society’s new Working Horse Festival. Read the story of harness champion Fifield Admiral, a tale about a poorly foal who grew into a prize winner, our update on a new horse-drawn farm in Devon, and reflections on what it means to be a horseman in the ‘New Horse Age’. Order your 2018 Heavy Horse World Calendar, take out a subscription, and the latest books and DVDs on heavy horses. Get the news, comment and practical tips, as well as enjoying articles on every aspect of the working horse world, from riding and logging, to driving and working. Don’t miss it – you can’t get this level of news about your favourite equines anywhere else! 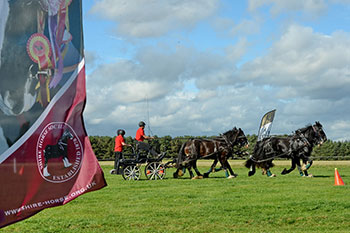